If you are a beginner guitar player, time holds a special importance for you, like it has for me. Most novice guitarists can’t wait to play songs and I’m sure you’re busting to get started. It is common for many rookie guitarists to be impatient and want to learn guitar songs as soon as possible. Nothing compares to the feeling of achieving a goal, and in this case, playing the very first guitar song.

Learning a few basic chords is a pre-requisite to effectively learning to play that first song you want to learn. Once you have practiced your newly learned chords playing that song will be so much easier as well as fun.

Choosing the song for you to learn first is kind of an important step. If you pick a song that’s too tough may well cause some frustration which has caused a lot of those trying to learn how to play guitar to quit before ever really giving it a try.

You may love the song but trust me when I say some songs are not really intended for rookies and may have some very complicated chords and is what causes the frustration. Pick an easier song and one day you’ll play that more complicated one. Starting with an easier song will give you confidence and encourage you to learn those tougher chords.

Jamming with friends is a great way to get there sooner. It certainly has made a huge difference in my level of playing, even though I was very shy at the start. The biggest thing I learned from my guitar playing buddies is timing as I really sucked in this department.

If you don’t have guitar playing friends, yet, you should spend time on Youtube looking for cover tunes on guitar. I have learned how to play so many great songs this as usually you can see exactly what the guitarist is doing with their hands making it easier to follow along. Plus you can practice the song over and over and over until you learn it.

I joined Jamorama.com to learn faster and with less mistakes.

I was going to point out some songs that helped me learn guitar but they may not be for you and is why I mention Youtube.com as a good starting place. I also use Google.com to locate songs I like and the chords. Do a simples search for the song name followed by the word chords.

Being able to see the chords as you watch someone playing the song is great but you can’t always see what their fingers are doing in detail and is why it’s great to have a printout or using your monitor to view the song and chords. This will also show you if you are trying to do a song with chords you don’t know yet.

The combination of Jamorama.com and Youtube videos can really help you learn faster and builds up your confidence level. 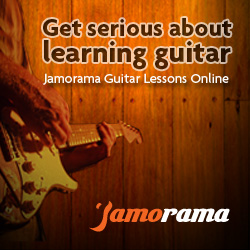